HomeblogDoing Massage Through a Letter of Protection is a Bad Idea!

Doing Massage Through a Letter of Protection is a Bad Idea!

I was reminded of how bad an idea accepting LOPs is today when I received a notice of a bankruptcy hearing for a former patient we had seen a number of times who provided us with a promise that we would be paid out of legal settlement fees related to her injury case.

Normally we would not have gone anywhere near this patient if she had come to us initially with just a letter of protection from her attorney. When we started working with her she had an active open auto injury claim with some benefits left. At some point the benefits ran out (or it might have been that the insurance company decided they no longer wanted to pay for it I can’t recall off the top of my head but it makes no difference really – either the insurance company is paying for a claim or they aren’t).

Below you can see some information that was provided to us regarding some of the legalities of bankruptcy protection, etc. (I made sure not to include anything specific to this case – we don’t need to violate any HIPAA laws. and make matters even worse!)

So we had a relationship already established with her and a therapist seeing her whom she liked. She said she still needed some more and asked if we could continue to treat her for a little while longer. She promised up-and-down that we would be paid, whether out of the final legal settlement or out of her own pocket.

I suppose since we had already made some money on the services we provided when there were still benefits available I agreed to take the gamble that ultimately we will be paid for the additional services.

For about two years we checked in at regular intervals with her attorney on the status of the claim and settlement. Each time we were told to check back again in a few months.

What I expected would happen was that we would receive an offer to settle the bill at some discount from the full fee that we itemized (usually in the form of a fee reduction request). That is pretty typical when dealing with a letter of protection when there is some kind of a settlement. The attorneys want to negotiate all outstanding bills so they can keep as much of the settlement for themselves and for their client.

When someone claims bankruptcy on the other hand, that is basically a legal way that someone who is broke can rid themselves of any outstanding claims of debt including those who have provided services and have not been paid yet. As you can see below, dealing with bankruptcy as a creditor (the person who is owed) can also be a pain if you’re not a lawyer or don’t want to spend a lot of money for one to help you navigate any possible collection activities, appeals, etc. 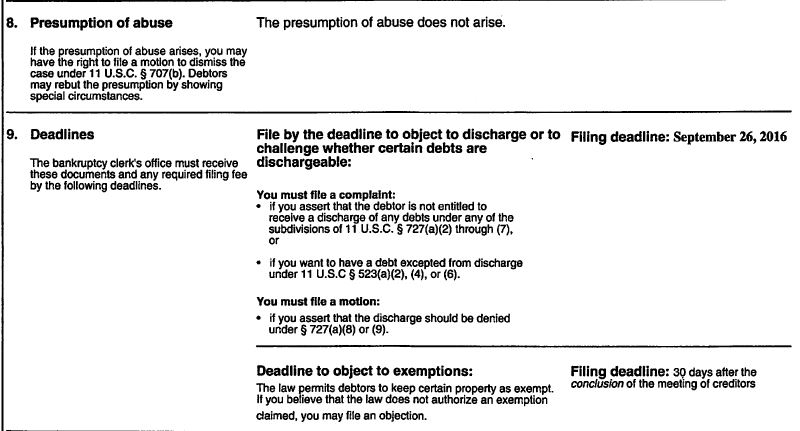 So while I fully expected to take some reduced amount of the fees owed, the bankruptcy notice was definitely a most unwelcome surprise.

Having to settle for as little as 50% of the amount of the fees due is definitely not very good, but it sure beats zero!

I can only blame myself because I allowed it to happen. I really didn’t want to extend our services after the benefits on the claim ran out but she was a very nice lady and promised to pay no matter what happened, and I guess it was more of an emotional decision then a logical one. That’s usually not a good way to win in business.

I’ll just chalk it up to yet another lesson learned in a long string of lessons over many years dealing with massage and insurance!