By now everyone is well aware of the embarrassing incident where New England Patriots owner Robert Kraft was busted at a Jupiter, FL “massage parlor” for receiving “sexual services”.

The thing that stands out for me in this sorry episode is not what the pursuant investigation found, but what it did not find, and what that says about the perception of massage businesses in the United States.

What they did find that was not surprising is that sexual services were being offered at the Orchids of Asia Day Spa. I have talked about these types of places – often referred to as “massage parlors” (the majority offering some kind of “Asian” massage with red neon lights in the window) in prior blog postings. While not condoning the activity, I have endorsed the idea, in line with the position of many current presidential candidates, that criminalizing “sex work” causes more harm and victimization of the sex workers than a legal, regulated system would.

Since a lot of sex work is hidden behind the label of “massage”, the result is that it becomes more difficult for therapeutic massage practitioners, like those here at Body Well, to command the respect they deserve as professionals. In reality, it would be much better for us if the two separate types of services (therapeutic vs. sexual) could be more clearly delineated without fear from the 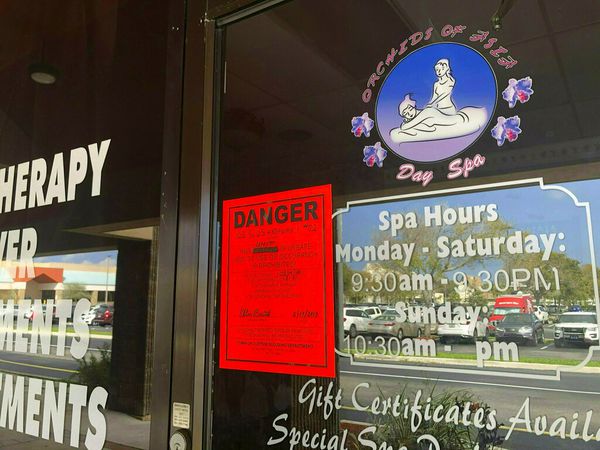 To make matters worse for the legitimate massage community, we have seen a significant increase in human trafficking in recent years where massage establishments are used to house the  victims, often smuggled in from Asia under false pretenses. They are then forced or blackmailed into performing sex work (along with massage). (For in depth research you can view a report by the Polaris Project about massage and human trafficking).

As if it was not bad enough that massage therapists have to fight the negative perceptions related to massage parlors where consensual sexual services were offered, we now have human trafficking being added on top, which is arguably much worse!

In the case of Robert Kraft and Orchid of Asia, which received massive publicity, a lot of outrage came out related to the idea that human trafficking must have been involved. There was a rush to judgment about the establishment and Kraft himself, despite no evidence of that crime. Even loyal patriots fans were ready to jump on the bandwagon of those accusing him of being complicit in human trafficking and sex slavery.

Ultimately, upon completing their investigation, law-enforcement authorities found that there was absolutely no human trafficking or coercion involved at the Orchids of Asia Day Spa / massage parlor in Jupiter.

The point I am making goes far beyond a simple rush to judgment. This has to do with the way people look at the massage business, and the conclusions people jump to any time they see a massage establishment or they meet a massage therapist. The general public must not be force-fed the idea that massage and human trafficking are so closely or necessarily intertwined.

If you think for a minute this is not happening, just look at the bills the Florida Legislature is looking to pass in the near future, such as HB 851. Among other things, this bill wants to burden all licensed massage therapists in Florida with taking an extra credit of continuing education about human trafficking upon every renewal. It wants to force massage therapists to hang signs about human trafficking in their offices. It will force massage establishments to designate and train a “human trafficking manager” of sorts. In my opinion this is misguided, prejudicial and unfair.

For years and years massage therapist have endured the same old joke when we meet somebody where they ask “Do you give happy endings?” While this is not really amusing to us massage therapists, I think most of us have gotten used to letting that one slide. But it’s taking it to another level if people are regularly conflating massage businesses with human trafficking and slavery. That’s not something we can or should laugh off, and everyone needs to reserve judgement until authorities have completed any necessary investigations, based on evidence, not innuendo.

Besides everyday people, the media in particular has a responsibility. They must refrain from whipping up sensationalized allegations about massage businesses that leap to make links between proud professionals and scum of the earth.

Massage therapists have made great gains in the worlds of wellness and healthcare. To continue on that track, we have to stand up for ourselves and fight the bullshit associations.